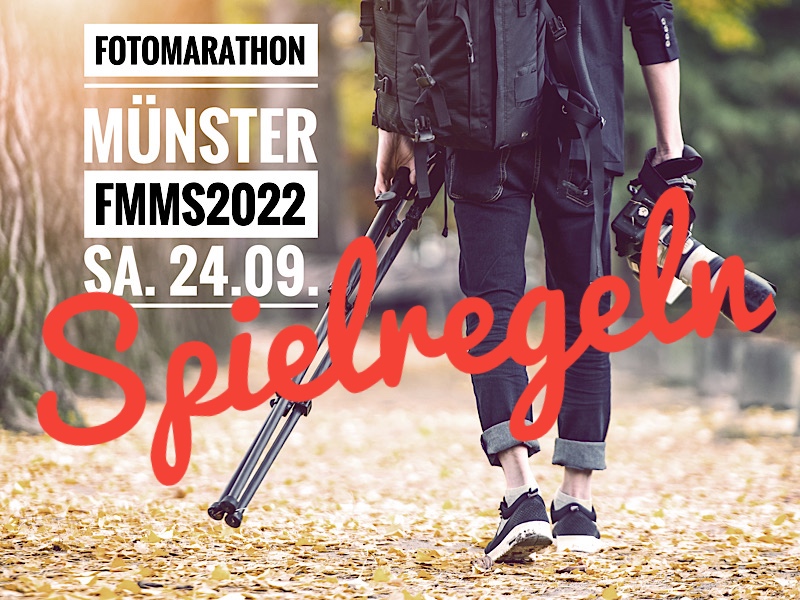 We have summarized the most important rules for the 5th Münster Fotomarathon, which will take place on September 24, 2022 from 10:00 – 18:00. If you don’t have a ticket yet, you can reserve your personal starting place here in our store.

In addition to the rules, you will also find an article “FAQs about the FMMS2022” with answers to frequently asked questions about our Fotomarathon here on our homepage.

The goal of the Münster Photo Marathon is to create a photo series consisting of 12 photos to 12 given photo titles within 8 hours.

Only digital cameras (no cell phone cameras, no analog cameras) with an empty memory card of the type SD, CF, MMC or xD are allowed.

All photos must be taken during the specified 8 hours on Fotomarathon day. The photos will be taken in the given order of the specified individual themes, they must not be edited afterwards, which can be checked by means of the EXIF data.

Therefore, please check the settings of your camera before the starting shot and set the current date and time if necessary.

At the end of the photo marathon (when the memory card is handed in), only the 12 photos to be submitted for the competition may be stored on the storage medium in the specified order. After copying the photos, all participants will receive their memory card back immediately.

Photo series that contain racist, pornographic, violence glorifying or other questionable motifs will be excluded from the competition and the exhibition.

The starting signal will be given on September 24, 2022 at 10:00 am. The meeting point (start and finish) is in the city of Münster and will be announced in time.

Please be on site early for the registration process! The accreditation as well as the handing out of the documents takes a bit of time. We would also like to take a group photo shortly before the start.

The Fotomarathon team will be present at the start location from 9:00 am until 11:00 am, so latecomers still have a chance to start until 11:00 am. After that time, it will no longer be possible to start.

The first 6 photo titles will be distributed to the present participants punctually at 10:00 am. You will receive the second part of the photo titles at the intermediate station from 13:00.

We will be waiting for you at the intermediate station or at the finish line at the times indicated in each case.

The start number is not identical with the order number – so not like it was the case at previous events. You will find out your start number only on the day of the Fotomarathon when you receive your starting documents.

At the starting point and at the intermediate station, there is a theme sheet with a sub-theme and 6 photo titles each, which specify the themes of the photos and must be photographed in the specified order. Up to the finish point, therefore, exactly 12 photos have to be taken, matching the 12 titles.

Your start number must be clearly recognizable on the first photo of your photo series, so that we can later also assign your series to you.

The photo with your start number will be taken by the participant himself. However, it is not mandatory that you take a photo of the number printed on your participant card. You can also include your race number in your picture in any other form, for example as a house number, car license plate or as a number painted with chalk on a stone.

So be creative and come up with something. 😉

Photos must all be taken in JPEG format. Please set your camera to the highest JPEG quality level. With regard to photo exhibition, it is recommended to set the image format to 3:2, as the photos will also be printed and exhibited in this format.

You should keep the frame theme of the photo marathon in mind as a “red thread”. One of the judging criteria is to implement the central theme and create a coherent photo series with the photo titles.

The Fotomarathon is also a document of time, and so we are looking forward to interesting snapshots from Münster. But also “living room arrangements” are possible. Prizes will not be awarded for individual photos, but for the best series – whether in black and white or color.

All photo series will be submitted anonymously to the jury for evaluation and awarding. Which photo series was created by which participant will remain unknown to the judges during the selection of the winning series.

All photo series will be shown publicly as part of an exhibition.

In addition to the exhibition, there will also be an award ceremony for the best photo series, previously determined by an independent jury.

The best photographers will receive attractive prizes for their photo series and will be presented on our homepage with their respective photo series.